Adapta Sertão operates as a coalition of six farmers’ cooperatives active in 14 municipalities1 at the basin of Rio Jacuípe in Bahia. The semi-arid region in the northeastern state of Bahia is the poorest region in Brazil. Over-grazing has destroyed extensive pastoral lands and fluctuations in the availability of fodder mean that milk yields are low. Unpredictable rainfall destroys 70 to 90 percent of crops, while dry periods are lengthening and intensifying each year. The Government’s response to this problem has been to build a network of processing units to add value to farm produce. But falling farm yields, irregular technical support, poor management, limited access to credit and markets have meant that the processing units have had limited impact on stabilizing agricultural productivity and farmers’ incomes.

Rede Desenvolvimento Humano was founded in 1990 to coordinate the Women’s Action Agenda 21. It focuses on sustainable development, non-discriminatory education, and health and sexual reproductive rights. In 2003, REDEH initiated Adapta Sertão as a small pilot project to stabilize farm productivity in five sites in Valente Municipality. The project tested solar powered water pumps and drip irrigation to address water scarcity. By the following year, it was apparent that the costs of solar powered pumps made them uneconomic. However, a shift from ﬂood irrigation to drip irrigation showed promising results, increasing productivity while lowering costs.

Scaling up strategies that work

In 2006, REDEH expanded the Adapta Sertão pilot to five sites in the adjacent Municipality of Pintadas, where local farmers and government had partnered for over ten years to improve farming families’ living conditions. In the following years, with the support of the German Environmental Agency, REDEH expanded the pilot project to 40 sites, building a robust evidence base for drip irrigation and exploring mechanisms to replicate the technology. Farmers’ cooperatives also set up retail stores to disseminate the new adaptive farming techniques and promote farm produce.

Building a robust evidence base and diversifying farm productivity

In 2011-12, with the support from the Brazilian National Research Foundation and funding from the Climate and Development Knowledge Network, Adapta Sertão partnered with the School of International Relations and Pacific Studies at the University of California San Diego and Centro Clima da Universidade Federal Rio de Janeiro1Center for Integrated Studies on Environment and Climate Change, Federal University of Rio de Janeiro. The collaboration formed 19 Center for Integrated Studies on Environment and Climate Change, Federal University of Rio de Janeiro to collect and systematize drip irrigation data, quantifying its productivity impacts, and developing five-year projections of its impact on the local agricultural value chain. The links with these university research programs gave scientific credibility to this new model for sustainable agriculture emerging from the practices of farmers’ cooperatives. At the same time, Adapta Sertaõ continued to test other adaptive strategies, such as balancing animal feed, producing fodder from lower quality water and processing local drought-resistant fruits, creating an expanding set of sustainable strategies to optimize farm productivity. Among other findings, research showed that farmers preferred investing in meat and dairy production, as this commanded higher prices than fruits and vegetables in the market. To support scaling up and wider adaption of climate change adaptation strategies, REDEH has created regular forums for cooperative farmers and technical experts to share implementation strategies and results for practical problem solving. In one instance, Adapta Sertão is collaborating with Embrapa, the Brazilian Corporation of Agricultural Research, using their expertise in big farm agricultural technology to identify and test adaptation strategies for smaller scale, cooperative farms. 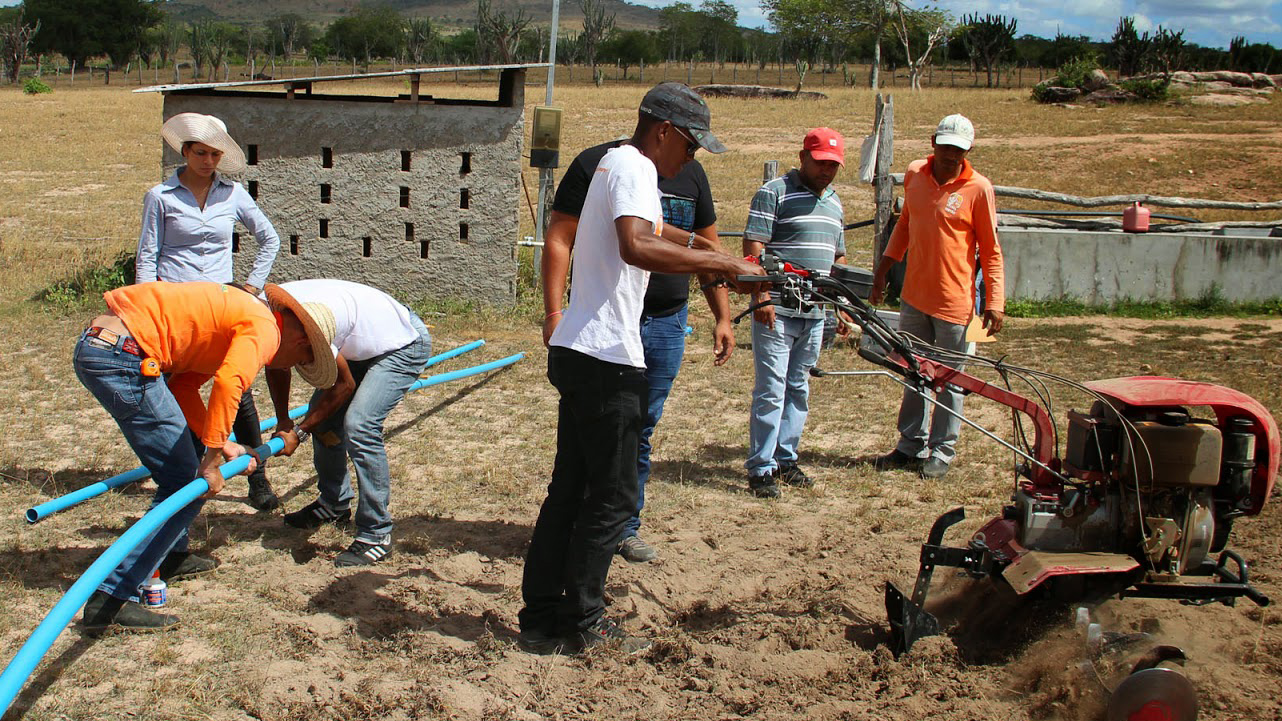 Consolidating and disseminating an integrated strategy and leveraging new partnerships

Given a growing set of proven strategies for sustainable production, support from the Climate Fund of the Brazilian Ministry of the Environment enabled Adapta Sertão to consolidate the different approaches into a Smart and Sustainable Agro-Climatic Model (Modulo Agroclimatico Inteligente e Sustentavel, MAIS) of adaptive farming. The partnership focused on promoting, testing and monitoring these practices, and how to balance the various components of MAIS – including milk and meat production as well as cultivation of fruit trees – across 100 farms. It also disseminated adaptive farming tools and technologies to hundreds more farmers, creating a network of retail stores managed by farmers’ cooperatives. This rural retail network represents yet another innovation, providing a distribution mechanism for new technologies in rural areas where small farmers could not otherwise access technological innovations previously available only in cities. By 2017, REDEH plans to have MAIS operational in more than 700 farms.
Building on these initiatives, Adapta Sertão is also partnering with the Inter-American Development Bank’s (IDB) Multilateral Investment Fund (MIF). MIF’s PROADAPT Program aims to improve the reliability of produce supply from small farmers to distribution channels2http://www.fomin.org/en-us/HOME/News/Press-Releases/ArtMID/3819/ArticleID/1198/Farmers-reduce- climate-risks-in-impoverished-region-of-Brazil-. The MIF partnership is also testing a pilot fund called AGRADAPT which works with Adapta Sertão’s credit cooperative to build financial management capacity and provide credit, enabling farmers to buy tools and technologies to implement MAIS.

The MAIS model starts by understanding the maximum number of animals that a farm can support to avoid over exploitation of the local resources and over-grazing. The local biome (caatinga) which is used for fodder needs to be restored in at least 20 percent of the area. The remaining portion of the farm is developed using agroforestry and agro- ecological principles. Subsequently, specialized technicians use specific MAIS principles and technologies to optimize the use of the local resources (water, land, vegetation, etc.). A sustainable farm management and organization plan is then developed with the farmer. Once the farmer agrees with the proposed project, the technician helps the farmer submit a micro-credit application to the local credit cooperative. When the credit is approved, the MAIS system is implemented through a staged process, nurtured over 3 to 5 years to show the full results. The result is a gradual change towards more sustainable agro- climatic practices in which yields are stabilized and fluctuations minimized even during more severe droughts lasting up to three years.

The innovation and the value of Adapta Sertão’s work is internationally recognized, winning global awards such as the 2008 SEED Award and the 2014 Millennium Development Goal (MDG) Awards. The MAIS model has emerged as an innovative, climate-smart set of technologies, owned and developed by small holding farmers with the support of partner institutions. Through their partnerships, the farmers’ cooperatives of Adapta Sertão have not only gained access to new tools, knowledge, technologies and credit previously unavailable to them, but also created a robust evidence base demonstrating MAIS as a viable, scalable model for adaptive farming. Out-migration has been significantly reduced. Partnerships with institutions such as Embrapa and IDB show that, despite their mandate to advance the development of low income and poor communities most vulnerable to the ill-effects of climate change, such as farmers in the Sertão, these institutions did not know how to reach and work with this constituency. Their partnership with the Adapta Sertão initiative enables them to reach smallholder farmers and learn how to enhance their productivity and security in the face of climate change.