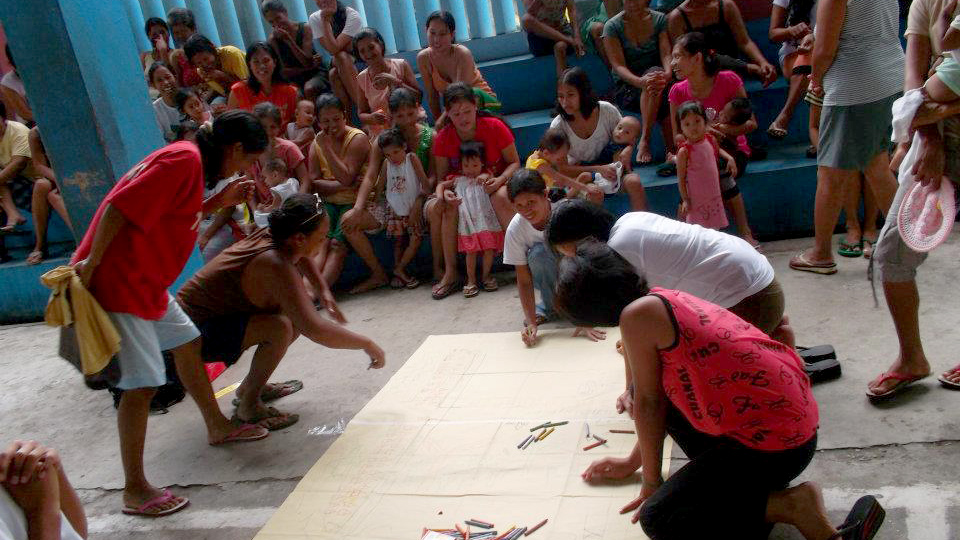 Win-win partnerships for resilience in the Philippines

Communities living in informal settlements with poor access to basic services face everyday health risks that are exacerbated during natural disasters. The DAMPA (Damayan ng Maralitang Pilipinong Api) network of community-based organizations has engaged multiple stakeholders at national and local levels to deliver water to informal settlements and monitor health services delivery. DAMPA’s strong constituency base, its presence in Typhoon Haiyan-affected areas, and its track record with government led to partnerships with the Department of Social Welfare and Development to monitor the delivery of disaster relief assistance, and with the local government to ensure that typhoon-displaced communities are resettled.

Philippines is one of the most disaster-prone countries in the world. In addition to risk of typhoons, ﬂoods, and earthquakes, the country is experiencing prolonged drought and the effects of El Niño events. Compounding these threats, rapid urbanization has led to a proliferation of unplanned settlements often situated in highly disaster-prone areas1GFDRR Philippines Country Program Update, May 2014: https://www.gfdrr.org/sites/gfdrr/files/region/ PH.pdf.

In 2010, DAMPA facilitated a series of community mapping exercises with more than 500 community members in Manila, to identify vulnerabilities and risks faced by urban poor communities in the face of ﬂoods and increasingly hot summers. Water supply emerged as a priority. Poor access to water in PACOMNA community in Barangay 275 Binondo Tondo3Barangay 275 Binondo Tondo is one of 2 large main clusters of settlements that make up the Parola Compound Neighborhood Association (PACOMNA) community in Manila, one of the Philippines’ largest informal settlements, with a population of about 60,000. Barangay generally refers to a neighborhood or district within a village or municipality. drove communities to buy water from private suppliers at exorbitant rates. The low water quality caused frequent water-borne infections, particularly among children, which inevitably worsened during ﬂoods. With prolonged summers and high temperatures residents also suffered from skin diseases caused by heat and poor hygiene, owing to water shortages. In addition to increasing women’s caregiving burdens, women responsible for water collection would have to leave their homes and children unsupervised for long periods to wait for water suppliers to deliver water.

Much of Manila gets its water supply from MAYNILAD—a public-private partnership providing metered supply of potable water. Communities found that they could afford to pay for metered water, but not the high cost of water supply infrastructure. Following a series of dialogues with barangay officials, PACOMNA members in Barangay 275 Binondo learned about development budgets assigned to Members of Congress for development work in their constituencies. Together, community leaders and barangay officials approached Congresswomen Angping who agreed to allocate PHP 1.7 million (approximately US$39,000) to pay MAYNILAD to install a water connection in Binondo. Community leaders from PACOMNA also negotiated with barangay officials for permission to lay the main water pipe that brings water to the entrance of their settlement. Once the water connection reached the settlement through four water points at the edge of the settlement, communities had to find a way to distribute the water inside their settlement. PACOMNA residents created a system where four hoses were attached to the main pipe, each of which would deliver water to the four blocks of households. They also organized four community water supply workers who earn a small income by ensuring that each block gets its share of water.
PACOMNA community members have also organized a community savings-based fund, originally to help them pay for private water tankers. Today the monthly water tariffs to MAYNILAD and the four community water supply workers are paid from this fund. As a result of this arrangement, which DAMPAs call their ‘water cooperative’, 550 households in Barangay 275 have a dependable, potable water supply that community leaders say has reduced household water costs by 60 percent and significantly reduced health problems during the rainy season and summer. 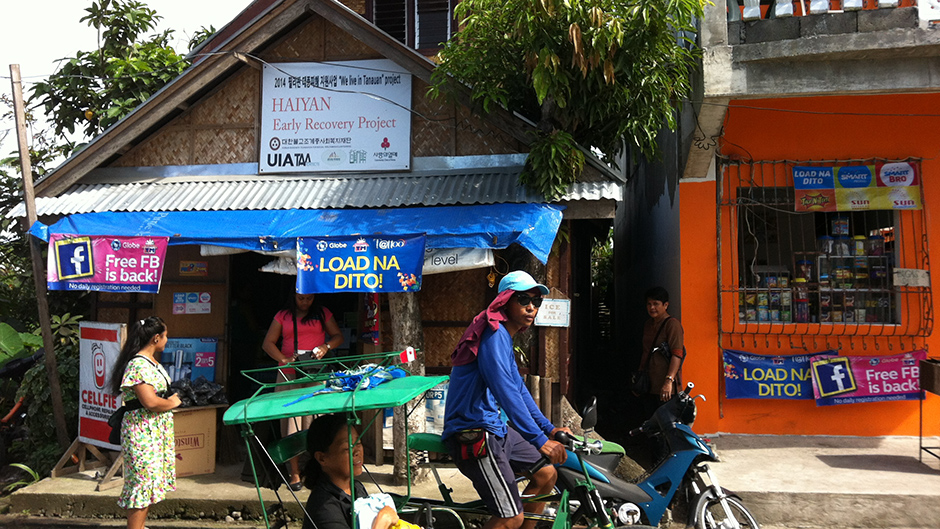 Scaling up the ‘water cooperative’ strategy

After seeing PACOMNA’s success with the water cooperative, a neighboring community, Samar Women’s group in Delpan, has used the same strategy to secure water supply for almost 300 households. The money saved after paying for the community water supply workers and water tariffs has been used to start a small shop, with a portion of the profits going back into the community savings funds.

In the city of Navotas, communities were also buying water from private suppliers at high costs. The Bicol Area Women’s Association has devised a different approach. They negotiated with MAYNILAD for 150 individual water connections and engaged the local government for permission to lay pipes in the densely populated settlements. In addition, women negotiated with a pipe manufacturer to buy pipes at a lower cost. DAMPA has plans to replicate these strategies to improve water supply in the Visayan island region where communities continue to buy water at a high cost.

Community health workers visited five barangay health clinics in Manila5Tanza Navotas, Bagong Silangan, East Fairview in Quezon City, Cabuyao, Laguna, Manila to identify priority community concerns. Problems communities encountered included: clinics charging for medicines and services that are supposed to be free; unavailability of essential medicines, such as for tuberculosis; demands for bribes and discrimination against poor people. Many poor families also had not received their Philhealth cards, which entitles them to subsidized health services. DAMPA’s formidable constituency base, and strong working relationships with barangay officials and national and provincial government helped them gain access to barangay councilors to discuss their concerns. Barangay councilors supported community leaders to municipalities to find out about health clinic budgets and the services.

In each barangay, DAMPA-affiliated grassroots women leaders and community health workers visited the municipal health office to find out about the budgets allocated to clinics as well the medical supplies and services clinics are supposed to provide. Communities reported corrupt clinic activities to barangay officials who are part of local health committees, pressing them to monitor the clinics and address the hoarding and sale of medical supplies meant for poor families. Barangay officials were compelled to monitor the clinics more closely and be more accountable to local communities, as a result of which medicines are now available in these clinics.

Since 2012, DAMPA has had a Memorandum of Understanding (MOU) with the Department of Social Welfare and Development to identify beneficiaries and monitor delivery of the Philippines conditional cash transfer program – Pantawid Pamilyang Pilipino Programs6See Gupta S and Purushottaman ‘What Communities Want: Putting Community Priorities on the Agenda for 2015’ Huairou Commission, 2013.. As a result, DAMPA has been able to add 1,500 previous-excluded families to the programs’ beneficiary list.

Since 2010, DAMPA has been organizing communities in 16 barangays to map their risks, federate, and start a dialogue with barangay officials to address their development needs, such as water and sanitation in Tanauan, one of the oldest towns in Leyte province. In 2013, after these communities were hit by Typhoon Haiyan, DAMPA’s well-organized, active federation ensured itself a membership in the Technical Working Group, which in turn enabled DAMPA to secure permanent resettlement housing in Pago, San Roque for 380 families displaced from coastal areas within the 40 meter boundary.

Owing to DAMPA’s credibility with the national government, following Typhoon Haiyan in 2013, DSWD signed an agreement with DAMPA to formally monitor the delivery of relief in twenty barangays in Tanauan, Leyte. Teams of DAMPA leaders held discussions with groups of typhoon-affected men and women to identify their needs and conveyed these to the local governments. By tracking relief supplies at the Municipal Hall where they first arrived, through to the barangay offices, and what actually reached the communities, DAMPA community leaders found that relief supplies were being stolen and substituted by local officials. Youth volunteers took photographs of what they witnessed, providing DAMPA with evidence they reported directly to DSWD headquarters in Manila. In addition, community groups self-organized to monitor basic services such as adequate number of toilets, clean water, food and medical services, ensuring that these were accessible to those who most needed them.

DAMPA has negotiated with a range of different partners in different sectors to develop solutions that have upgraded living conditions in poor settlements. By negotiating with its Congressional representative, MAYNILAD and local barangay officials, the CBO network developed an innovative solution to the water problem in one informal settlement and later scaled-up to reach others. The network also works with local and national level officials to monitor corruptionand improve healthservice delivery. DAMPA’s credibility with thenational DSWD has led to partnerships identifying beneficiaries for the Philippines conditional cash transfer program and later to monitoring and reducing corruption in disaster relief delivery after Typhoon Haiyan. Governmental partners benefit from these collaborations as well, by more effectively delivering infrastructure, services and social protection to populations whose poverty and lack of access to basic services and infrastructure leaves them otherwise vulnerable to inequities in development services and the ill-effects of natural hazards and climate change.