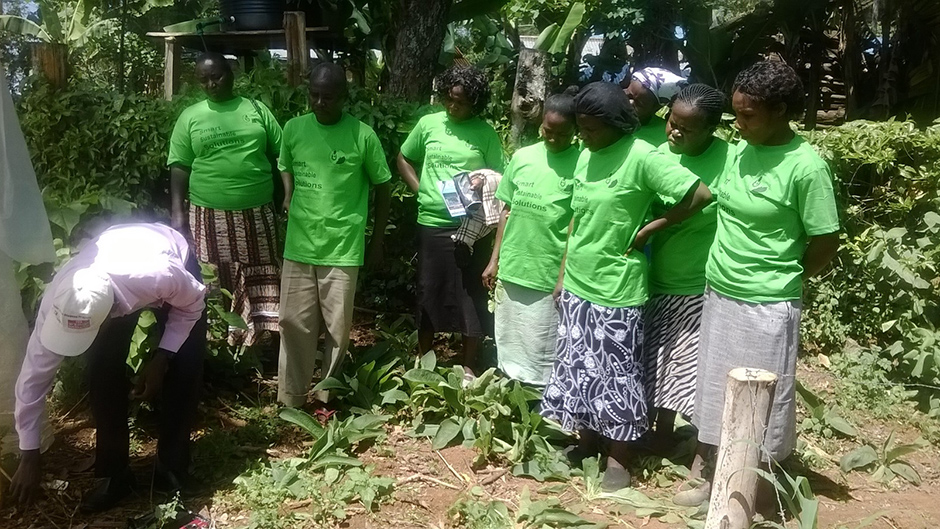 Shibuye Community Health Workers (SCHW) was first organized to address the needs of families affected by HIV/AIDS and to ensure the effective delivery of healthcare resources and services to poor communities. Being located in a predominantly agricultural region, however, women felt the need to address food, nutrition and livelihoods for the communities in general, and for the HIV/AIDS-affected families in particular. In response, SCHW experimented with organic farming techniques and offered practical solutions to government programs that usually serve large-scale cash crop farms. In addition, realizing that AIDs widows were often being evicted from their land, SCHW set up local village level multi-stakeholder platforms to protect vulnerable women’s control over their land—the asset most crucial to their ability to withstand shocks. Today they are also in dialogue with the Ministry of Agriculture on questions of land tenure and agriculture, and engaging multiple national ministries to influence the county budget to reflect women’s resilience priorities.

Shibuye Community Health Workers is a grassroots women’s organization founded in 1999 by a group of home-based caregivers in response to the HIV/AIDS pandemic in their communities. Their goal is improve women’s health and promote their access to health service. SCHW has more than 2000 members who are community health workers organized as self-help groups in 14 locations across Kakamega County. These grassroots groups are linked to similar groups across the country through a federation of grassroots organizations facilitated by GROOTS Kenya.

A responsive and effective healthcare system is vital for poor communities, especially so when faced with epidemics or pandemics. Despite sizeable national and international resources earmarked for HIV/AIDS, however, necessary resources and services were not reaching the poor and vulnerable living in Kakamega County. In 2004-2005, SCHW began inviting provincial administrators, district officers and local chiefs to a dialogue forum where grassroots women conveyed the ineffectiveness and the lack of transparency of the Constituency AIDS Control Committees (CACCs). CACCs are the decentralized structures of the National AIDS Control Council (NACC) responsible for implementing and funding community driven responses to HIV/AIDs. The women, having impressed the government officials with their understanding of the NACC’s Strategic Plan, offered to assess the CACC’s structure for community level health services and to track local budgets allocated for the pandemic. Through subsequent face-to-face dialogue, SCHW brokered a partnership with the Shinyalu Division of CACC instrumental in getting funds to local communities. Grassroots women continue to provide feedback to officials to improve health service delivery to the poor and ensure that health clinics are properly stocked and staffed.

Land represents a major asset that enables households to withstand shocks including those resulting from disasters and climate change. In communities that are primarily agricultural, securing land is critical for basic survival. As caregivers of people affected by HIV/AIDS, SCHW members learned that widows and orphans who lost family members to HIV/ AIDS were often illegally evicted from their lands. SCHW members collaborated with the GROOTS Kenya CBO network to form watchdog groups advocating for women’s land rights and protecting the property rights of women and children with family members suffering from HIV/AIDS.

To organize the watchdog groups, grassroots women first investigate and map communities to identify households where women or orphans are facing eviction or threats of eviction. These cases are presented to village elders, traditional chiefs and government officials to gain their support. The leaders and decision makers are then convened to play the watchdog role and resolve disputes. Each group is comprised of about 20 leaders, including tribal chiefs, government representatives, and women and orphans who have benefited from such interventions. The groups begin by educating communities on land rights, succession and inheritance laws and then mediate between the disputing parties to prevent evictions and ensure that property rights are restored. This initiative is part of a nation-wide initiative that has been scaled-up by GROOTS Kenya1Gopalan, Prema, et al. “From Beneficiaries to Stakeholders: Grassroots Women’s Groups Drive the Demand for Good Governance through Pro-Poor Development,” Draft Discussion Paper for DFGG Learning Summit, World Bank (June 2-3, 2008). http://huairou.org/sites/default/files/From%20Beneficiaries%20 to%20Stakeholders.pdf.

Safeguarding land and property is a step towards securing livelihoods, but it is not sufficient to secure health. As health workers and caregivers, the women of SCHW also know that antiretroviral drug therapy protocols require HIV/AIDs patients to eat regular, nutritious meals. When mapping their vulnerabilities and risks grassroots women realized their crops were increasingly affected by longer periods of drought and more frequent ﬂooding. Thus women decided to promote sustainable organic farming to combat the adverse effects of increasing weather extremes. Learning from traditional farming practices of the elderly, women farmers undertook local seed preservation, soil conservation and food storage. Women also started to set aside demonstration plots on their lands to experiment with new adaptive farming techniques and train women in adaptive farming of food crops.

To gain the support of government agricultural programs, SCHW documented the findings from the community risk mapping exercises and shared them with government officials at a Local-to-Local dialogue meeting. This forum was the first opportunity for grassroots women to formally meet with ministry officials overseeing poverty reduction, agriculture, and the environment, and to their contributions and concerns around food security. Impressed by the work and accomplishments of women farmers, the Ministry for Gender, Children and Social Development agreed to link women’s collective farming groups to its credit fund–the Women’s Enterprise Fund. The Ministry of Agriculture agreed to provide technical support and training to women farmers. And three grassroots women were invited to join local agricultural committees; one was subsequently elected to join the poverty eradication committee. These were major accomplishments for SCHW as government agricultural programs and extension officers usually target men engaged in large-scale, cash crop farming, overlooking women who tend to do small scale, subsistence farming. 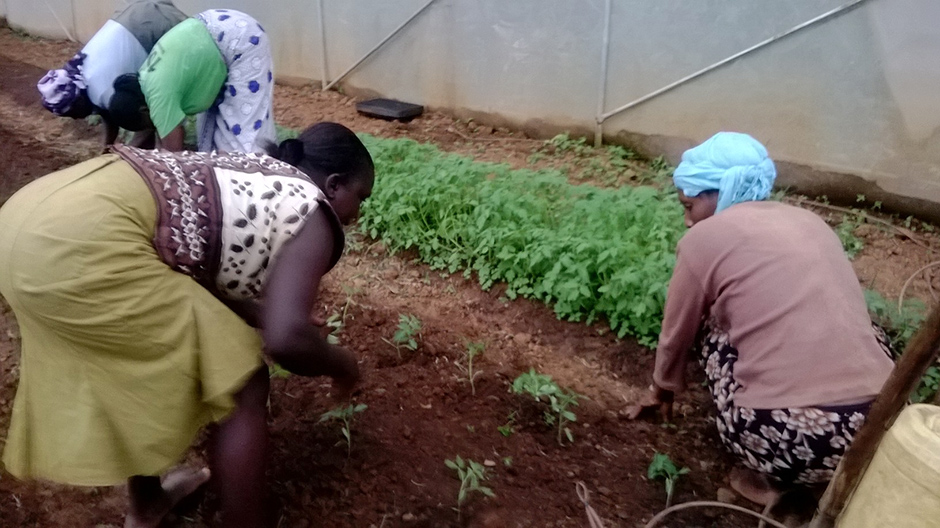 In May 2014 SCHW organized a dialogue and learning exchange between grassroots women and agricultural extension officers to discuss gaps in agricultural and land rights policies. SCHW formed farmers’ groups and used demonstration plots to convene group training and technology sessions with government agricultural extension officers. Women then applied what they learned in their farms or backyards. Extension officers now regularly hold trainings at these plots at the request of women’s groups. In addition, extension officers are disseminating new information and providing technical assistance to a larger number of farmers in more economical and efficient ways. Recognizing their creativity and contribution to food security, women farmers were supported by the Kenyan Government to participate in government organized agriculture exhibitions. This led USAID to contribute to farm inputs, including poultry, banana tissue culture, and a greenhouse for 100 households.

Together with the Kakamega Forest Conservation Association, the Ministry of Environment, Water and Natural Resources, the Kenya Forest Services, and the Ministry of Agriculture, Livestock and Fisheries, SCHW has inﬂuenced the 2014-2015 county budget to ensure that it reﬂects grassroots resilience priorities and responds to the needs of the communities living in disaster prone areas.

Despite their success in improving farms through adaptive farming techniques, grassroots women continue to be confronted with broader structural issues. As organic farming does not lead to high yields in the short term, the Ministry of Agriculture continues to promote heavy use of chemical fertilizer through subsidies, which the women farmers groups are trying to resist using.

SCHW’s health care perspective informs their approaches to community-based resilience building. Their multi-dimensional approach with a diversity of local and national partners brings resources, knowledge, and expertise to bear, improving the everyday living conditions of poor communities while strengthening community capacity to deal with the shocks and stresses of disasters and climate change. Further, the community-government collaborations improve the accountability and transparency of government health systems and technical extension services, while also convening local platforms that enable vulnerable women and children to retain their land.