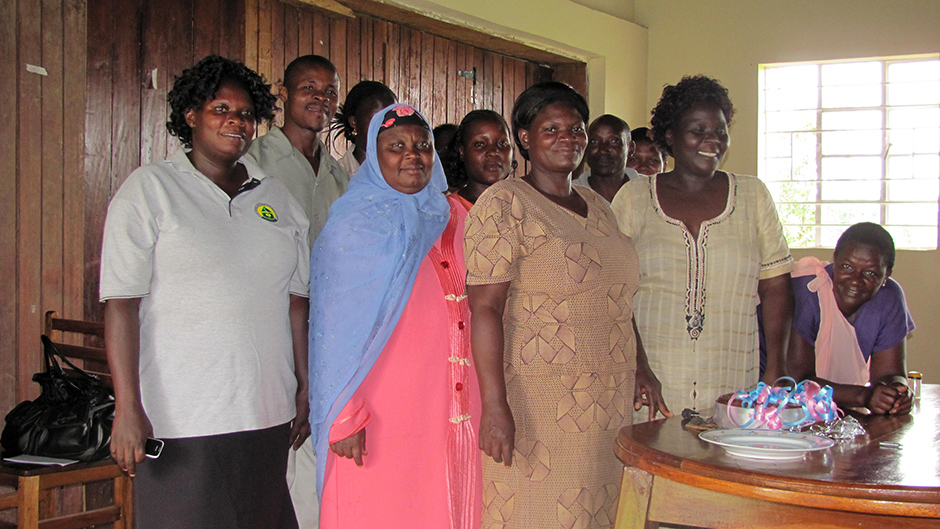 Slum Women’s Initiatives for Development (SWID) is an organization led by grassroots communities committed to building resilience and security in food, health infrastructure and land tenure for marginalized groups. SWID’s initiatives bring together three strategies: First, SWID’s food security initiative, women collectively negotiated with landowners and local governments to build demonstration gardens for women to learn about cultivating higher yield fruits and vegetables. Second, to reduce the impacts of urban flooding in Jinja municipality, women worked together to promote hygienic practices, improve household solid waste management and dispose of polythene bags to prevent drains from clogging and encouraging Jinja Municipality to deliver on its commitment to the UNISDR’s Resilient Cities Campaign. As a result of the women’s advocacy, local officials made infrastructure improvements in the informal settlements. Third, SWID’s ongoing partnerships with local governments and land administration officials to secure land titles are key to reducing women’s
vulnerability to food and livelihoods insecurity.

Drought, increasing food prices and privatization of public land have reduced the ability of poor communities to feed their families. In 2010, SWID trained a team of 40 community researchers (26 women and 14 men) to survey 400 households in eight parishes. They found that two thirds of the surveyed households grew food to supplement what they purchased. Their ability to continue growing food was rapidly changing, however, due to environmental destruction and evictions following privatization of public lands where communities were cultivating food. Resulting food shortages meant that some women were eating only one meal a day. The findings from the SWID survey became the basis of the community food security strategy.

Negotiating for land for demonstration gardens

At the heart of SWID’s food security strategy are small demonstration gardens to grow different varieties of drought-resistant crops so women could grow food in their own backyards. To find vacant land for the demonstration plots, grassroots women collectively negotiated with landowners and local governments. SWID held a workshop with government officials in Buwenge Sub-county to advocate scaling-up food security initiatives, and in response, the sub-county’s Community Development Officer allocated a plot of land to the group. With support from Huairou Commission’s Community Resilience Fund, the Buwenge group created a fruit tree demonstration garden, teaching local women how they could grow their own fruit trees, manage tree spacing and apply organic manure. Several women have since begun to plant fruit trees not just to supplement their household food consumption but also as an enterprise to increase their incomes.

Since the food security initiative began, SWID’s grassroots members have successfully negotiated land for four demonstration gardens, though one was demolished when the land was sold to a mining company. Starting with 150 women cultivating backyard food crops in Walukuba-Masese, the initiative has now grown to 600 women across communities in Kakira and Buwenge, Budondo and Mafubira. To date, these 600 households are able to have at least two full meals a day, and any surplus is sold to supplement women’s incomes. Eighty five percent of the women involved in this initiative are able to grow all the food they need.

To sustain the initiative in the long term, women are encouraged to set aside part of their earnings from selling farm surplus to buy seeds. Women have learned how to dry and store maize and beans which can be consumed during food shortages or planted during the following season. Success of this initiative is also being replicated by other organizations in Uganda. Community-based organizations such as Kawempe Home-Based Care Alliance and Uganda Community-Based Association for Child Welfare from Kampala have visited SWID to learn and implement these practices at home.

When Jinja Municipality signed on to the UNISDR Resilient Cities Campaign in 2010, SWID saw an opportunity to amplify grassroots concerns. SWID signed a MOU with the municipality to reduce risks in informal, impoverished settlements. Using Local-to-Local dialogue, local leaders, grassroots women, CBOs and other stakeholders were brought on board. Communities highlighted their own efforts to promote hygienic practices, improve household solid waste management, and improve drainage. As a result, communities, the municipality, and SWID are paving the way towards realizing commitments in UN Resilient Cities Campaign’s 10-point checklist.

SWID’s grassroots community members have also advocated municipal governments to upgrade local infrastructure. Jinja Municipality has begun upgrading access roads and improving lighting and drainage systems, and has gazetted land and constructed a waste management facility. In Budondo, the main road was repaired as a result of community advocacy of local councilors. In Mpumudde, dialogue with local authorities led to commitments to upgrade settlements and public services. The local health center was renovated, rubbish bins were provided, and lights were installed along main roads.

Since its inception, SWID has worked with communities in informal settlements, particularly women, to secure land and housing. Communities threatened by eviction are particularly vulnerable as they are unable to invest in housing improvements or control how land is used and these impact their abilities to withstand extreme weather events. Land and property are valuable assets that provide a cushion for households and communities in times of crisis. This is supported by Uganda’s Constitution and Land Reform Legislation, granting every person the right to own property individually or in association with others. SWID’s land mapping exercise, however, showed that low-income women were consistently being denied their property rights and have difficulty obtaining land titles that would lead to decent housing. Since 2004, SWID has been organizing women’s savings groups and revolving funds to help women gain access to credit to pay for their land titles. To date, the revolving fund has assisted 120 women to purchase land.

To advocate for women’s land rights, facilitate land titling and prevent evictions, SWID developed a multi-stakeholder partnership with the Uganda Land Alliance, Jinja District Land Board, Jinja Municipal Council, Jinja District and Area Land Committees. This local dialogue brought all the relevant stakeholders together on a common platform. Grassroots women voiced their concerns over their constitutional rights and learned about the formal procedures as well as roles of different administrative bodies concerning land titles. Subsequently, SWID formally requested the Walukuba-Masese Division to bundle several land title applications and process them together, allowing women to approach the District Land Boards as groups rather than as individuals. The Division agreed and formally directed the Jinja District Land Board to process the SWID members’ applications as a group. As a result the following day, 35 applications for titles were processed and 31 women received their titles. This practice serves to reduce corruption as it prevents officials from asking for bribes when a group is present. At the same time it reduces administrative processes and sets a procedural precedent for women’s land titling in the future. Using this innovative process, another 200 community members are preparing their land titling documents with 100 expected to receive their titles in 2014.

The partnerships initiated by the Slum Women’s Initiative for Development in Jinja District each illustrate a holistic, multi-sectoral approach to resilience for women and their communities, recognizing linkages among land tenure, food security and settlement livability. SWID’s resilience strategies are grounded in community-government partnerships and foster a number of innovative approaches for risk reduction. First, by negotiating land for public demonstration gardens and engaging extension training services, women increased their family food security and modified extension services to accommodate their needs and interests. Second, SWID’s advocacy efforts built on the Jinja Municipality’s existing commitment to the UN’s Resilient Cities Campaign, paving the way for upgrading frequently- ﬂooded settlements. And third, a broad, multi-stakeholder partnership convinced the District Land Board in Walukuba-Masese Division to create new land titling mechanisms for women, with the dual benefits of reducing their vulnerabilities and boosting governmental accountability and transparency.